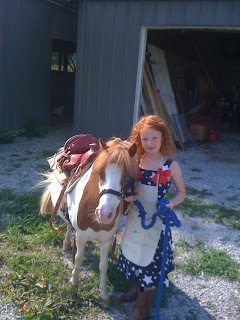 We continue to enjoy the different aspects of our new place in the world. I came home from rounding at the hospital on Friday with the family in an uproar getting ready for the 4th of July Parade in Eubank. By the time we got the miniature horse in the borrowed trailer we were ready to be off. The horse had wiggled his way out of the "stall" and into the front of the trailer. We decided he was fine. As usual, we were the last ones to arrive and brought up the rear of the parade. Sarah and I watched as the many fire engines, tractors, Shriners miniature trucks, semi-trucks, and ATVs went buy until the last best group arrived. My family was the only walking group with Hadiah pulling Elle and her patriotic [chichen] with Hannah holding Prancer with Miriam riding. I can only say that it is good that walking can still be a part of the parade, and my family was by far the cutest group in the parade. Later that night we watched the fireworks from the back of our Ford diesel pickup truck. I guess we have arrived in the rural South. Yesterday, I walked out to the corral where Rebecca was dealing with a spoiled, mad Montana (16+ hand Tennessee Walking horse) who wasn't in the pasture with his friends so he wanted to rear and swing around and just be naughty. He settled down and later when she was on his back he behaved himself. We seem to be in new areas again. Last year at this time we had just arrived in Cameroon overlooking one of the prettiest valleys and hills that I've ever seen. We even road horses there up into the hills getting caught in a cold downpour while shooing away a stallion who was causing problems with our stallions that we were riding. God has been merciful to us and we hope to obey him. 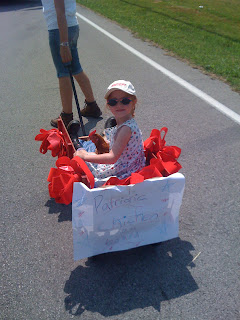