"The Anne of Green Gables Effect"

I seem to get myself into such odd situations. Take for example Friday. I spent a full day (9AM to 3:30 pm) home schooling. Then I took the girls and mom to play violin in the children's ward of the hospital. (Among other children there is a 9 year old boy there extremely sick with AIDS.) After playing at the hospital I took off in our untrustworthy SUV to pick up some friends to spend the night. (Some Bible translators who vacationed up the hill from us had a 12 yr old girl named Anna. Hadiah and Anna became friends and so they are spending the weekend together. Anna spent the night here Friday, then Saturday Hadiah spent the night with Anna's family in a village about 2 hrs away. Since we already had 1 girl spending the night, I invited 2 other missionary kids to spend the night. These are other girls, ages 6 and 9, who live about an hour away and have become friends with Hannah and Miriam.)
So I had 10 people in my house for the night- which many might think is enough. In addition, as I left to pick up the girls, I said to Dasen,"I don't know what we'll have for dinner but we'll think of something simple." Well, about an hour after I returned from picking up the girls, an African well-dressed family showed up at our house. This is a family we know and love. The father is a surgical resident and the wife is in a prayer/discipleship group with me. They have 2 children, and speak French mostly (but the dad speaks English.) I didn't realize why they were there until about 10 minutes had passed and we had served them tea. Then I remembered that at discipleship group I had set up times to host all the residents before we leave; in my mind I hadn't confirmed this; but they were right to come b/c I had indeed talked about it.
So, thankfully we hadn't eaten yet. I ran into the kitchen and scrounged in the refrigerator. Dasen had been making French toast and I added to it a fruit salad, dried dates and cucumber slices. As I grappled in the refrigerator, I said to Dasen..."I'm so glad I didn't know about this 2 hours ago because I would have been so stressed, as it is now, I just think it's funny." We sat down to dinner, all 14 of us, and I eyed the girls as if to say "Don't you dare let on that French toast and cucumbers aren't normal American fare for dinner." We ended up having a lovely visit and learned a lot about the Congo, geographically, economically, and personally. They left around 9 pm and as Dasen drove them home, the surgical resident said "I sure wish you would stay here."
When Dasen drove the 1 mile back to our house (it is very difficult to walk on uneven muddy ground on a dark night) he brought 3 short-term Westerners with him. They were on their way to our house anyway as I had invited them for dessert at 7 pm to say goodbye as 2 of them were leaving Cameroon the next morning. We enjoyed home made brownies and story telling until midnight when they left. I was so tired by then. As we collapsed into bed after checking on the 7 girls, Dasen said "It's through these encounters that people feel loved." And I agree, the level of hospitality we've been a part of here in Africa has stretched and enriched me, and I can only pray that in our home the Kingdom of God in the fullness of His love can be realized.
Posted by Ritcheys at 10:50 AM 1 comment: 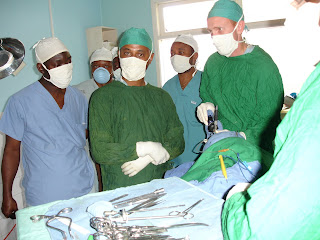 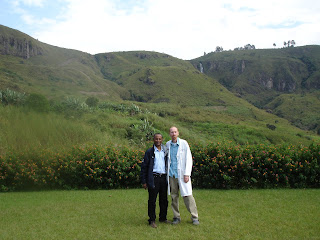 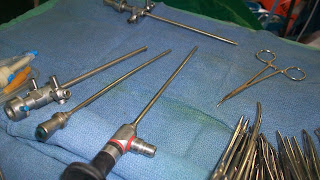 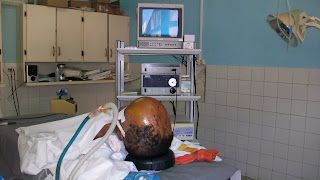 Today concludes my two days with a visiting neurosurgeon. He goes by Magnum as his Ethiopian name is a little hard for us westerners to pronounce. I have really enjoyed the time that I've had with him as I must admit that neurosurgery is pretty cool. He finished his 12 years of residencies and fellowships and is now a spinal neurosurgeon. He has been in Nottingham, England for many years but continues to use his month long vacation to serve in Ethiopia and Malawi. He is visiting here a fellow Brit who is volunteering through the British Volunteer service. They were nice to think of us in the two days that he is here. I was able to assist him with a VP shunt and learn that that is not the best way to go anymore. The 3rd Ventriculostomy is replacing it in the treatment of hydrocephalus so we hunted down an arthroscopic scope in a dusty box. Today we sterilized the equipment, and I got to see the inside of the brain.
Posted by Ritcheys at 10:05 AM No comments: I find it a blessing that in Cameroon after carrying the violins around we now have performance majors in violin come visit us and help give lessons. Two of the visiting residents played violin through college. I also find it interesting that they both have interacted with Gamelan [sic] music which is an Indonesian type of music. Karen the Caucasian took a class in Gamelan from Smith college when she was in high school, and Emily went to Cornell where they have a Gamelan orchestra. It was neat last week to hear Hadiah, Emily, and Karen (who played on Miriam's little violin) play together.
Posted by Ritcheys at 6:54 PM No comments: 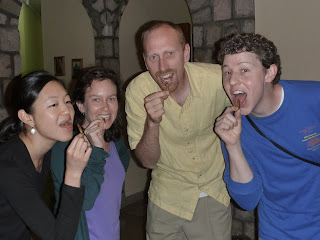 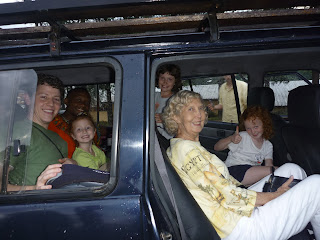 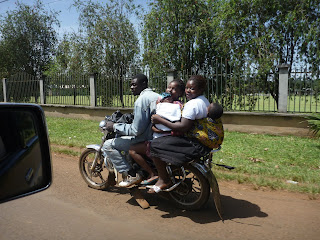 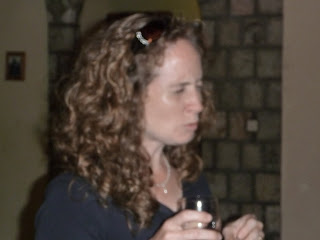 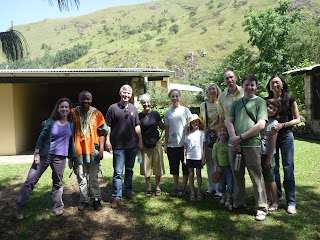 Yesterday, we all went to Bamenda with the three visiting residents (FP, IM, Ped), one PAACS resident (can you tell which one is he), and the Bardins. We took a picture of the obligatory over packed motorcycle. We got in some craft sight seeing and the mandatory visit to the open air market. As we left the market, Mwenymali and Karen each picked up a bag of live grasshoppers for later feasting. Mwenymali grew up eating them, but Karen, the internal medicine resident from Mt Sinai Hospital, NYC, didn't grow up eating them. Later that night the residents showed up at our house after the cook at the hostel had cooked the grasshoppers for them. (recipe is boil them with a little boulion cube until the water is gone and them use their natural oils to stir-fry them in the pan) They had already had a bunch and said that they were good. (they are pretty good tasting like salty corn chips) The best picture was when we got Rebecca to eat one. It is so sad that the picture is blurry, but you can tell the response. Rebecca actually thought they weren't too bad. Hadiah had one leg that she swallowed whole. THEN Hannah tried to swallow a leg. Now a leg isn't that big nor does it have much taste. Well the large amount of vomit in the sink and then the further vomit in another toilet says a lot about what our mind can do to us. We then all settled down to play Quirkle.
Posted by Ritcheys at 6:18 PM No comments: 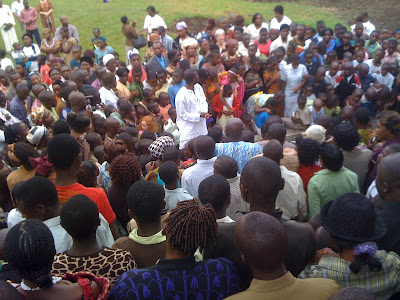 We are now into the third week. As can be guessed, the internet continues to be a hit and miss experience. The internet is working tonight so I've tried to get some work done. Last Sunday was the group baptism service in a baptismal outside of church. Now I admit that my picture is not really spiritual, but I really think that you need to play the game similar to "Where is Waldo." This game is find Miriam. I couldn't see anything down in the recessed baptismal, but I could watch Miriam on the edge of the cement keep turning around to tell the little kid behind her to quit pushing. I am so glad that the older three girls are branching out and going on their own to childrens' church. Last week after church, Miriam and Hannah went to a house of a girl that invited them.
Posted by Ritcheys at 5:54 PM No comments:

The End of Last Month 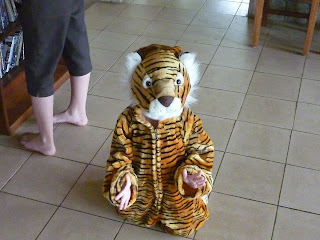 I thought that I should finish writing about last month before this months ends. Well, I must admit it, we celebrated that famous of American holidays with my girls visiting the missionaries and short-termers to gather in candy. Rebecca finds it a community building exercise, and so I took the kids around. (Alright, I didn't get the logic either.) I did get some of the kids candy though, so all is well. I think the Westerners are already weird to the locals, and we didn't really 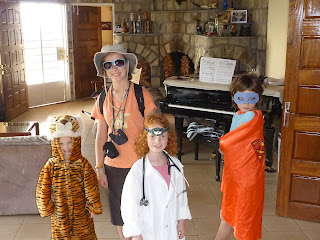 get that many second looks. I did like the fact that we didn't have to put on coats under our costumes. 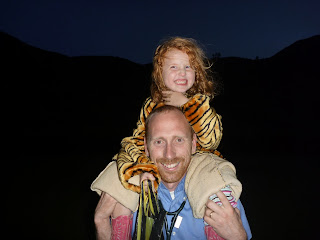 Posted by Ritcheys at 5:31 PM No comments: 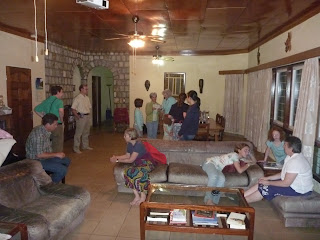 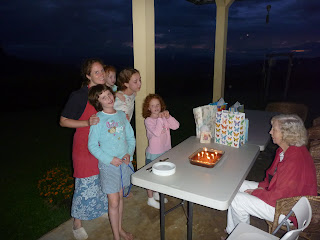 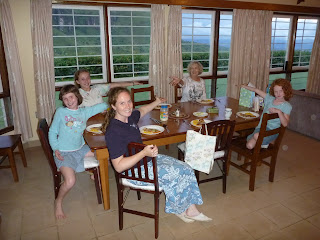 Last Friday, we celebrated Sarah's birthday. Don't tell anyone, but she is now the age of perfection from the Old Testament numerology - "77." We celebrated with pizza, brownies, and presents for supper. We then had the local ex-pat community over for doughnuts (they didn't know about the brownies). We are getting better at making fresh doughnuts. Sarah has also been very blessed with several letters from her Sunday school class celebrating her birthday. Thank you! Today the women just went off to play violins on the ward. Rebecca has been fighting a bad cold, and we all have allergies with colds. The season is changing towards the dry season now so it doesn't rain every day. The girls aren't happy as the change seems to have brought out many praying mantis. They find these large insects quite creepy (except Elle who wants to have one). Hadiah wants to own snakes and lizards. She picked up a chameleon the other day on the way back from a walk. The lizard then bit her. She told us about the story and said that the bite didn't really hurt. The Cameroonians watching her then all told her that she shouldn't pick it up as the lizard bites. I got to play volleyball Thursday as the dry season brings the ability to play "dry" games in the late afternoon. Football (soccer) gets played in rain or dry. We are starting to think about what to do when we come back. The girls have many ideas.
Posted by Ritcheys at 5:40 AM 1 comment: