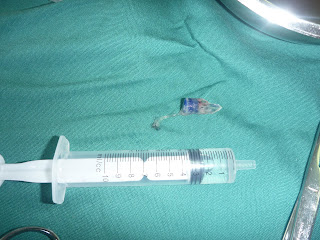 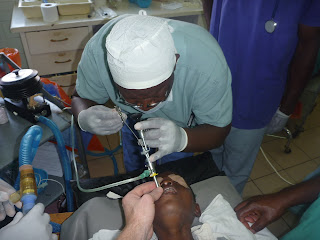 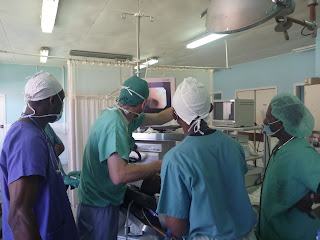 A week ago, the surgical team was invited to assist an 8 year old girl. She had chewed the end of a pen, and it went down her throat. The family had taken her to a local physician who "pushed it into the stomach." Later thst night, she started having coughing attacks. Three weeks later, the family brought her to Mbingo. We had a problem. We don't have a rigid bronchoscope, and the chest xray didn't show anything initially but then changed to a collapsed left lung. Dr Acha, the ENT surgeon, asked Dr Bardin, the internal medicine, pathologist, endoscopist, to bronch the kid, but the kid couldn't keep her oxygenation up during the bronchoscopy. What were we to do? After putting our heads together, we planned to proceed in the OR on Saturday morning with another attempt. The child had worsened with her left lung collapsed from being plugged by something. (remember that we don't have an ICU/ventilators/or suction on the wards) God was gracious to teach us some new techniques. I had thought that we could intubate carefully, use the flexible bronch with a wire kidney stone retrieval device first. We would then try the cystoscope (yes, what urologist use to look into the bladder). The child didn't tolerate the intubation-bronch attempts well and wouldn't saturate above 81% (normal >94%). We then extubated and changed the electronic towers (from Olympus to Storz) while we bagged (slang for ventilating with a mask over the nose and mouth with squeeze bag) the child. Once again, the oxygenation improved, and we then moved to rigid cystoscopic bronchoscopy. By the grace of God, we were able to grab the jagged edge of the plastic which had plugged the left bronchus. We win. Thank you for praying for us as these situations happen now and then where the instrumentation and situation don't fit our training.
Posted by Ritcheys at 8:04 AM