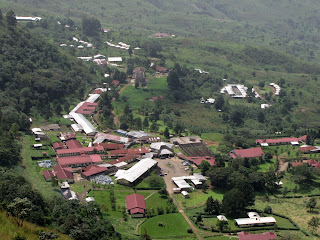 I'll try to explain
the compound a little. From this perspective, you may notice the entrance circle in the lower central aspect of the picture. The "driveway" to the road extends to the right. On the left are the hospital buildings. The patient first enters through what is the octagon grey building where the "screeners" see the patient and triage the patient sending them to the right outpatient clinic or consulting the medical/surgical services. If you can imagine the buildings representing the spokes of a wheel, then the first spoke moving in a clockwise direction from the circle entrance is a long grey building and is the maternity/prenatal clinic. Next is A ward which is the orthopaedic/trauma ward. The building next in the wheel has a two tone roof and is the surgical theatre with the newer roof representing the two new ORs for the orthopaedic surgeon, Dr Nana. The back of this building has clotheslines which are going to be removed for an expansion of the PACU. Next on the wheel is the surgical ward which houses gyn/gen surg/ophtalmology patients. The small building closer to the hub and next to the surgical ward which is bigger and a "T" is "B" ward, the men's ward. You've now reached the end of the spokes at the children's ward "C." This ward starts a series of linear buildings that extend in a sloping curve away from the "hub." The radiology department is in line with the children's ward. Then comes the "ulcer ward" which is actually two long rooms with people waiting for debridements/skin grafts. They stay for quite a while as their wounds heal as they often live where they can't get any wound care, ie no gauze or any other supplies. Still proceeding down the line of buildings, which was the backbone for this hospital 50 years ago as a leprosy hospital, you come to "F" ward, the women's ward. After this comes the physical therapy dept, library, shoe making dept, and then the hostel. At the end of this row is Drs Dennis and Nancy Palmer's house. Beyond that is some residents' housing, the church with the slanted roof on the left, then the school for the deaf, some "quarters", the primary school on the hill to the left and as you take a right sits the Sparks' house all to itself. There you have it. I need to take some pictures inside the complex so you can get a feel of how it looks from inside that jumble of buildings. May God bless. We ate tonight at the Bergers who are heading back to Switzerland for a few weeks before they start some time at Kijabe in Kenya. We found out from preacher who was there also that the sermon is on the tenth leper who returned to give thanks. Remember, God wants our thanks. dasen
Posted by Ritcheys at 6:39 PM